I always vote, and don’t engage with those who don’t.  Also, my vote leans to issues, not a particular party, as my belief system is that is just part of the job of a responsible citizen.  Feel free to disagree.

When common sense gets lost in the process

So when common sense leaves town, hard questions must be asked.  Such as, who in their right mind understands Indiana Republican women who support rapist-friendly judges?

who while in court, turned to rapist David Wise’s former wife victim and admonished her forgive her rapist ex (who drugged, raped, and shot pictures of her).  Then Eisgruber added his final instruction to the victim.  That she should “move on.”

(The victim discovered her rapes after looking at Wise’s cellphone and discovering pictures of herself, mid-crime.)

Except to go to work.

Related:  David Wise wants – wait for it – more time with their children.   All of which means that Wise while on “home detention” is free to harass his ex in family court.  Which also means Judge Eisgruber sentenced the victim who divorced Wise to be rid of him, to never being rid of him until the children turn 18.

Thank God the prosecutor is appealing.

However, the question must be asked:  Why on earth are these women smiling; and, whatever is wrong with them?

What is wrong with these women?

Have Indiana women given up on justice in Indiana?  Are they shell-shocked, or just sucking up because there isn’t a decent Republican female attorney in Marion County who would run against Eisgruber?  And what’s up with Democrats, Independents, or the Indiana Courts for Judicial Misconduct for the matter?

As nothing about Eisgruber’s re-election campaign makes sense, one can only believe something else must be going on.  The question is, what?

It’s hard to believe that either Indiana’s Republican women have been brainwashed beyond the point of having any common sense, or – there’s no way to say this delicately…are simply dumber than a box of rocks. 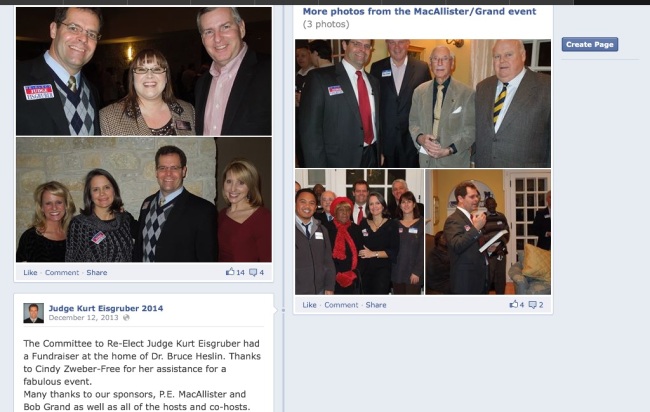 Judge Kurt Eisgruber – a friend to rapists in Marion County, Indiana; also running Without opposition. Something is seriously wrong in Indiana.

In a related, fundraising matter, why is Cindy Zwerber-Free a VP with Allied Solutions, a financial services outfit, fundraising for a judge who is running unopposed?  Does he hear cases involving Allied Solutions?  Also, who wants to be put under by the gas passer, Dr. Bruce Heslin and how could anyone possibly describe him as a “healer” given what he knows?

Likewise no fan of Democrats in power, specifically in California, who are getting women killed – by supporting increased law enforcement personnel, using crime as a marketing tool, instead of buying lower-costing, real-time, effective GPS.

Worst for last.  Women who participate in the Congress approved war on women by campaigning for officials to elect men who display depraved indifference towards female crime victims, scare the Bejesus out of me.

It's not about me....but working with and sometimes against attorneys, I *do* find interesting people doing interesting things.
View all posts by bonnie russell →
This entry was posted in Law, Politics and tagged Indiana, judges, misogyny, the Republican War on Women. Bookmark the permalink.