When it comes to your parent’s fiscal health when living in Riverside County, watch their back. 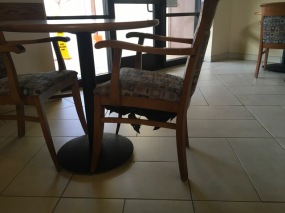 The bottom falls out…and is left that way. Seems an appropriate photo example of Eskaton’s Management style.The picture on the left is in the public café.

The picture struck me as exceptionally ironic.

However, this post was inspired by (click the following link) the latest veteran, needless death, courtesy of the La Jolla based,  Westmont Living. Retired, former military personnel continue to experience neglect.

In the above instance, the Readers Digest version is a resident Veteran was left outside on the patio on a hot day for a few hours.  His body temperature reached 103 by the time of his emergency hospital arrival by ambulance.

Calls from the Roseville facility to the family did not indicate there was a real problem.  After his death, the State of California fined the for-profit facility, at 5k a month to be ignored, a whopping $1,000.00 because they’d screwed up, previously.  I mention this, in conjunction with the current situation in the Riverside County litigation involving retired military personnel and other seniors.

Judge Craig Riemer allowed the foxes, i.e. the State of California and Social Services to intervene in the Riverside action of foxes guarding the hen-house, after Plaintiff Sherry Ikezawa sued the Board of Directors for a variety of long-standing financial mismanagement issues.

Judge Riemer did not have the case initially.  It was transferred to him to “expedite” the Courts time, without notice to Plaintiff.   In researching his background I heard three basic thoughts, repeatedly.

Sherry’s mistake was not bouncing him.  This became evident when Judge Riemer almost immediately dissed Sherry’s attorney, saying she was “trying his patience.” In short, by not bouncing Judge Riemer, Sherry wasted her time and money, as Riemer allowed the two institutions that should have been holding the Village accountable years ago, to intervene.  However —

Judge Craig Riemer did not allow the singular Plaintiff, Sherry Ikezawa, a resident, and Plaintiff, to intervene.  Although Ikezawa’s history is that of a Commerial broker.

Why would Judge Riemer do this?  I have heard Mary Carruthers financial company holds triple-digit millions with Riverside County.  I have no idea if this is accurate.  But it does have a whiff of fish, as whenever something doesn’t make sense, the answer is, follow the money.

Regardless, what does smell funny is barring the single individual sincerely interested in the rights of the seniors and Alta Vita residents, while allowing the two entities that didn’t do their job for over a period of decades, to join the effort to sell the facility. That reeks.

As such, residents would do well to remember that in preparation for the next cheerful round of newsletters courtesy of Eskaton.  Or when Sam Maizel drops by for a pep talk.

Residents might want to ask Sam why the kind of Chapter 11 Sam talks about is the kind that goes straight to auction and not restructuring as Sherry has always maintained should happen.  Also,

Why hasn’t Judge Riemer trimmed the budget where appropriate?

In the beginning, I listened when Bellann said she would just drop by the courts and have the judge to sign an order.  Judge Riemer did not rubber-stamp in the beginning, but he clearly seems to have come around as just about the only people not held accountable are the Receiver Raile and Eskaton.  Seriously folks.  The property has been available for quite a while.

Yet Cordes & Company can’t manage the thirty seconds it takes to link it to “Assets for Sale”  while the “leadership” Eskaton offers, can’t manage an easy chair fix in Alta Vita’s very public cafeteria.

Also, now they suddenly find some firms they rejected, or which walked away before, okay.  Why?  Certainly not for the benefit of the residents. This is for the benefit of the State, Social Services and the banks.  I don’t buy the reasoning it’s the fault of the resident contracts.  I do buy years of mismanagement – because it makes more sense. There is no need to look for zebras in a herd of horses.

People are wondering why Judge Riemer has not once questioned the fees of Eskaton and Raile, given both Eskaton’s monthly management fees and Raile’s monthly fee (in the high end of 45+K a month).  How can these fees be justified?  Especially when Eskaton was previously successfully sued for over-charging residents at one of their other facilities.

For years the board President, Mary Carruthers followed the wishes of the advisors to the very banks now suing the Village.  The management company that chose name “Altavita” did so apparently without checking or checking, but not understanding an existing retirement community in the area, with a less than stellar history, had a similar name.  Does Judge Riemer even know about this?  Does he care?

Does Riemer care that basic issues with Eskaton and Raile have been repeatedly raised and repeatedly ignored.  We’re talking decades of this….yet all discovery has been essentially, stopped.  Will Judge Riemer remedy this? No. Will he address the lack of performance,  especially with Eskaton and Raile again considering the very same companies with poor track records regarding senior health, who walked away or were rejected, earlier?

I ask as it is not fair for the residents to be on the hook for those who do not perform.

I also ask for this reason. Last month as my resident father and I were returning from the dining room, we overheard a few food-service employees in another room, (unaware we were quietly padding by) listening to the answer another employee received after asking for a raise….from just over minimum wage – if that.  The employee quoted a Supervisor,

“Well, if we give you a raise, then we have to fire someone  else.”

Dad and I looked at each other and wordlessly began to shake our heads. About the worst thing my Dad ever says is, “That’s gross.”  It’s exactly what we both said once we reached a private area (inside an elevator).  We see how hard the servers work.  We see servers giving extra love and patience to seniors, some who really slow the line.

But these servers bestow good cheer and much helpfulness — especially under tight deadlines in the café where coincidentally the chair depicting the bottom falling out, literally and figuratively, is in full, public view.

So in my view, in the interest of fairness, Judge Riemer must address the outrageous fees, from Raile and Eskaton. 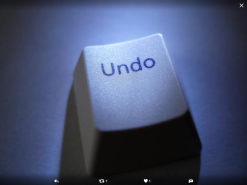 Cutting to the chase…

Should Senator Roth register as a Republican?

This also seems to be the view of retired General, now State Senator, Richard Roth of District 31.

In May of 2017, we visited Senator Roth’s office and asked for a letter of support.  We indicated it was of critical importance.

Two weeks later we received a note telling us where to file a form.

I am not making this up.

We visited Senator Roth again, this time with a crew in  2018.

We repeatedly stressed we needed a letter of support.  We received bupkis.  Again.  It’s something to remember when Senator Roth is out doing his Veteran’s Day or Fourth of July rah-rah veterans pr move parades.  Not to be outdone, our Congressional representative Mark Takano, was equally lame.  Riverside veterans and seniors should be aware Democrats are more like Republicans when it comes to actually, helping seniors out of the financial jam corporations place them.

Still, the evidence is strong this current dumpster fire of a sale, now that Raile and the Board, led by Mary Carruthers, continue the board’s years-long, balk at Filing Chapter 11, for reorganizing.  Only recently did the Board allow for the thought.  But again, as it pertains to “straight to auction.”

So remember, Chapter 11 Reorganizing is something Sherry Ikezawa said for years, should happen.  The documents I’ve read included former Board members writing to the Department of Justice asking for an investigation.  Those who spoke out were kicked off the board.  Folks, this goes back to 1999.  The State of California in my mind is an accessory to the current condition.  Meanwhile, Judge Riemer positioned the State as a ‘helper.’  And there is no help from the State Senator or Congress.  They’re as cold as Republicans.  Maybe there is something to the triple digit millions in with the County through Carruthers company. 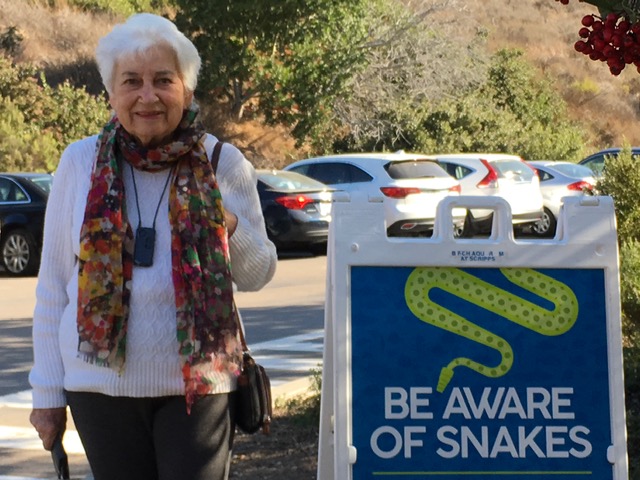 Sherry Ikezawa filed suit to protect her community.  Next, the usual happened. The below cartoon sums it up nicely. 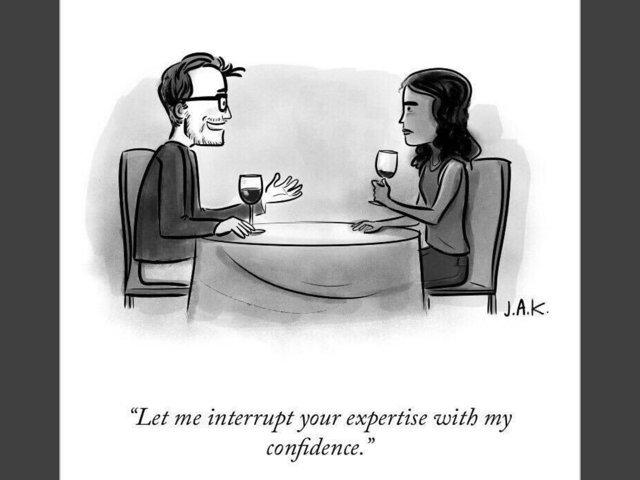 Yes.  A bunch of guys showed up with chests puffed up, and immediately began telling Sherry, with her decades of commercial expertise, what she should do.

Sherry is very polite.  She listened.  She told them what to do.  She listened when one short guy presented her ideas as his.  Sherry doesn’t mind. She just wants to get things done right…and the guy had no clue.  She even went on record to waive her fee.  I don’t think a fair judge would allow that.  But…

Anyway, these sudden so-called experts immediately promised to support Sherry as long as she was okay letting them do it their way.  The problem with that, is these are the very same guys who were ineffective while they were on the board, or the Finance Committee….including two who specialized in leaving their wives alone, so they could power monitor the dining room at every opportunity. Still, Sherry just wanted to get a deal done.

(As an aside, I can’t wait for another female president.)

But to recap:  they blew it. After years of complaining without filing a suit, they injected themselves into meetings with plans of support if —- there’s always an “if” with these guys.  None of whom let me be quick to add, were the slightest bit acquainted with Riverside’s track record of legit but ignored, elder financial abuse.

First a quick review of Riverside’s history with a judge who specialized in ripping off seniors.  It’s absolutely stunning Bill Sullivan was not criminally charged, given he admitted to a long history of ripping off Riverside seniors from the time they became a judge.  (The judges words, not mine.) 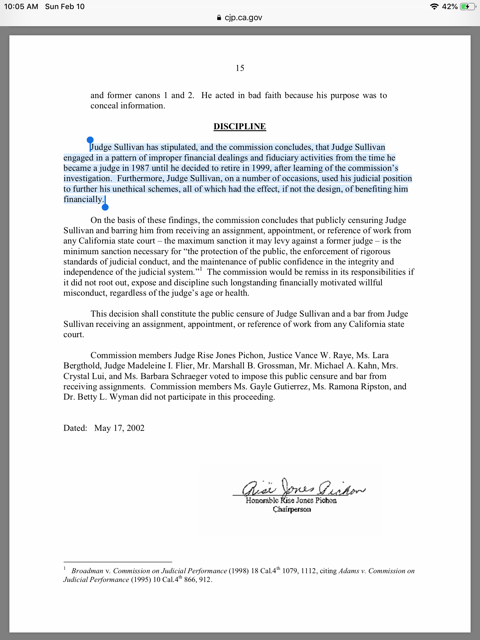 Bottom line.  Living in Riverside County is dangerous for seniors financial health.  They cannot depend on their elected representatives and it seems they certainly can’t depend on the courts.

As an aside – I can’t wait for another woman president.  Wait.  Did I mention that?

Fun Fact: When all was said and done, Juddge Sullivan, was not prosecuted. He returned to the bench as a high court judge in…the Marshall Islands.  Hey!  Grifters gotta grift!