This post is due a couple of fed up women @letat_lechat,  Dr. Melissa Bird aka: birdgirl1001, and a nod to @LEBassett (who apparently and magnificently dropped a truly, volume inspiring dime on some jerk doctor in an airport.)  h/t  @RespectableLaw

The other ladies connected through my pinned Tweet…and seemed excited to hear bout the partial solution to “Domestic Violence.” So I told them I would post it today.  If you don’t have time to read, just watch the three videos demonstrating the problem and the solution.

Prior to that though, and being unaware of the general “awareness level” silently challenging women everywhere, wanted to provide two quick examples of the full range of the problem.

Now for the solution!  Yep.  The solution to “Domestic Violence” which, surprise!  Has been around for years. Below is the last variation of a letter I send  regularly to top journalists, everywhere….which is annoying as 48 Hours and Dateline sell a lot of advertising with their weekly, “Who killed Becky Sue”  why don’t they air the solution?

Now, that said…here’s my letter.

How CA lawmakers are getting women killed.

The answer is: Domestic violence is a huge, money-maker.
My name is Bonnie Russell, and while I’m writing to inform you I discovered how to end relationship, domestic violence…first mentioning my discovery was, accidental.
Background

I was both a fan and good friend of Dominick Dunne.

Once, during one of our many conversations of his beloved murdered daughter, Dominique, over the years — in 2007 I was astonished to hear myself blurt, “Dominick, I will find the solution to these relationship murders!”

First, I had no idea what I was talking about.
No matter, went right to work as the pain in Dominik’s voice, so many years later, remained evident.
(Once a year I re-read Dominick’s first column for Vanity Fair. It was titled, “Justice.  A Father’s account of the trial of His Daughter’s killer.”)  The judge was awful.  Years later, Harvey Levin went after the judge.  He’s no longer a judge and Harvey delivered the most emotionally honest, electrifying tribute at Dominick’s Hollywood farewell. Sorry.  I digressed.)

It took me two years to discover the answer…and while I didn’t expect it to come in the form of technology, turns out, that’s exactly where the solution has been all along.
Fast forward.  This works!
Imagine a judge in Family Court, (where the bedrock of most relationship murders, begins) ordering a restraining order, but coupling it with a real-time, victim-notification warning, GPS device.  A GPS device that unlike what California and other states use, (below) can’t be cut off.

Click below for NBC’s report on the pathetic devices California law enforcement officials insist be used.
California Counties have issues with GPS Monitoring.
Next, imagine a human monitor noticing a potential violation, calling the cell phone of the intended victim, and advising her to clear the area where the restrained person is about to violate.
Next, imagine the GPS monitor using the Walkie-talkie radio installed on the GPS device, and telling him, “Hey there!  I see you are about to violate the court-ordered, stay-away distance. Please turn yourself around right now. Don’t make things worse for yourself.”
Next, imagine the guy remains determined to harm his former love — so he’ll ignore the warning.  (He doesn’t know his former love has already been warned and is no longer where he’s headed).  Next, imagine the Third call is to the police.
Fourth, add to that, to encourage the potential violator to rethink his options…imagine the GPS monitor flipping the switch for an alarm to sound — also installed on the GPS device.
This is just in case the Restraining Order violator decides to jump in a dumpster to hide.  Works great because once an officer arrives on the scene, people are generally helpfully pointing in the direction of the guy booking it up the street, along with a physical description.  (Red Hat…jeans, whatever.)
See how it works using these two, news clips.

Yes folks!  This is not Hollywood. It exists.  It costs the same as the absolute junk California (and possibly your state, is using.)
So the story is:  Why is effective GPS, not in use?
The ANSWER! (Again…it’s all about money and information control)
Because Domestic Violence is a hugely profitable business, thus neither the many, Domestic violence Non-Profits, or law enforcement agencies want to use it.
1.  The DV Non-Profits would be forced to change their business model, which they do not want to do, and;
2.  Law Enforcement does not relish losing control by being the third down the line of information.  Even though it is the same price point as the junk currently in use by the State of California.
Once I discovered the solution (two years later) I very excitedly called Dominick.  He was very sick by then, and I’m not sure he understand the technology aspect, but he sensed my excitement and was pleased to know there was a solution. I got the company a lot of press.
(I am a no-hype publicist by trade.  Or, and more accurately, a information junkie. I work with (or against) attorneys and, litigants,  Which means I funnel a lot of exposés to reporters.
Sadly, huge numbers of them don’t care two hoots about women getting killed. (See my Pinned tweet @Rockmedia ).
But although there was a lot of coverage…media missed the point. This technology should begin in Family Court.  A civil court.  Where judges are more concerned with protecting the rights of the perpetrator, and refuse to use it, and worse –  will not refer criminal cases to the DA.  So women are trapped in Family Court when they should be hot-footing it to the DA’s office demanding police and court services for their tax dollars.
I also tried to reach the agents for stalked stars and reporters, beginning with Erin Burnett, and later, Sandra Bullock, and ending…well, it really never ends.
No calls from agents have once been returned.  Am baffled why agents wouldn’t jump at the chance to protect their clients or their income. The stars?  This where the story gets worse.  The stars have no clue this kind of safety, exists.  No clue at all.
Worst for last.  Neither their agents or their attorneys are telling them.

My letter ends with my phone number and email.

What happens next?  Crickets.

As this tweet demonstrates, media remains a huge part of our problem. 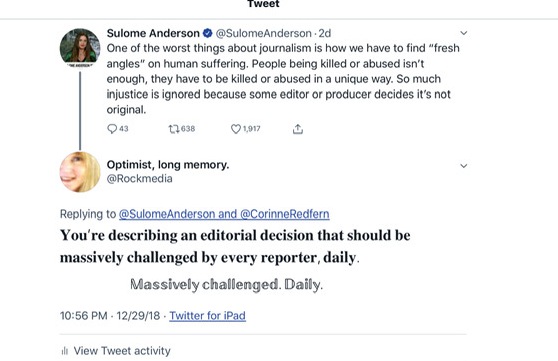 By the way, I have lots more stats and lawsuits against the companies my State insists on using.  Not that the company that has the best equipment cares about spending any marketing dollars to lobby for, well, a sane, life-saving, cost-effective, approach.

They’re out of Utah.  A State not known for its fine treatment of women.

So what’s the solution

We are.  Although women are 51% of the population, we might want to consider taking a more emphatic stance with candidates who want our vote, not to mention our volunteer work.  What say we first negotiate?

If a candidate refuses to make our safety through cost-effective, life-saving technology, their top priority, lets stop shooting ourselves in the foot by voting for him or her. Instead, lets demand candidates use tools that actually give women a level playing field.

Thoughts?  Should we start naming those who refuse?  I have lists!  Starting with Toni Atkins, my rep for years. But in those our years, couldn’t even get an appointment.  Same now with Todd Gloria.

Didn’t vote for  Todd.  A party favorite.  Because Todd will not represent women at risk.  I’ve met with a couple of police chiefs, probation pooh-bahs and such.  No one in California seems interested.

Ergo, no reason for any woman to work for, or vote for those who aren’t.

Not Todd Gloria. My vote went to someone who cares.