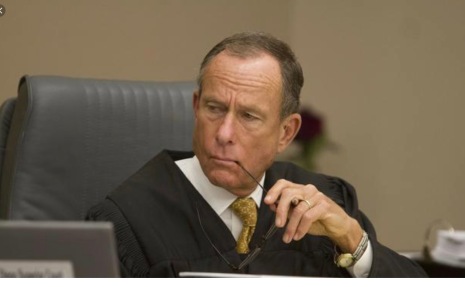 This story ends with a twist.

Will Judge Judith F. Hayes, follow the lead of Judge John S. Meyer in his disdain for women?

Short answer?  She did not.

After all, San Diego is notorious for its disdain for women.

Zimmerman’s mindset would stun the senses in any other city.

Zimmerman is currently complaining about being asked to test rape kits for God’s sake. She says “No.”  Claims it’s not cost-effective.  This is utter bull.

I know this having discovered the high-tech, cost effective, life-saving solution that features would-be, victim notification ahead of time, should the person wearing such a device, begin to go violate the distance ordered to stay-away.  These immediate warnings would virtually end murders from restraining order violations.

Murder investigations are very expensive, police-wise.  So why not use the type of GPS that can’t be cut off? A device that costs a lot less, and warns would-be victims ahead of time, in time to slip away, and save their own life?  I’d had meetings with both Chief Lansdowne and Zimmerman about this.

Dunno. Seems someone ought to investigate why San Diego continues using devices that not only don’t work, but which have cost people their lives, and sparked numerous lawsuits.

However, way back in 2010, I requested the San Diego City Council buy effective GPS.  (Made the same request before the County.)

Attending the City College gathering, I spoke with officials from the Center for Community Solutions.  They said, “Thanks, we’re not interested.”  Yep. The day after Diana Gonzalez’s  murder, the Center for Community Solutions told me they weren’t interested in a GPS device that had real monitoring in real time, with human eye-balls watching the screen, who would immediate call would-be victims to notify them when the person with the restraining order was close to violating a court-ordered distance to stay away.

(The second call would be to the police to notify them the location of the person violating the order, as the victim, armed with a head start, could slip out of the area.)

Also tried the many, so-called, “Domestic Violence” non-profits.  No dice with the Family Justice Center, either.  No dice for any of them.  (Told Mara Elliot about devices that work, when she was running.)

Too late I learned, it’s all a con…for which every official, participates.

What I learned was: I’m a slow learner!

Six years in, eventually I learned no one in San Diego, including elected officials Toni Atkins, Todd Gloria, Barbara Bry, and police chiefs William Lansdowne, and Chief Zimmerman. (Zimmerman couldn’t get me out of her office fast enough during our meeting) would ever be remotely interested.

Women should know just like Judge John Meyer, these people devalue women.  But then, so does the press. Here’s one, horrible example of reporting.

UT reporter wrote: “Juan Carlos Fernandez stalked his wife for months before showing up Nov. 13 her City Heights apartment, taking her hostage and killing her parents.” Reporter didn’t ask, “Why wasn’t he prosecuted.?”

End of the Backstory – now to the present.

Misogyny takes work.  Disdain takes no effort at all.

Perhaps this is why disdain for women is so readily applied to San Diego women.

Judge Meyer negated the hard work of San Diego Police, who were on the case when I dialed 9-1-1, after MacNeil showed up at my home to talk about a post I’d written back when he was a Deputy DA and busily demeaning women, right and left.

ABC reported MacNeil’s behavior in a segment teased as “Deputy DA accused of texting naked selfies on the job.”  ABC refused to ID MacNeil.  So I did.

MacNeil didn’t like it.  After stewing about it for a while, he began calling, and leaving chirpy, “Hi this is Michael! I’m an attorney in San Diego! Will you please give me a call?” messages. 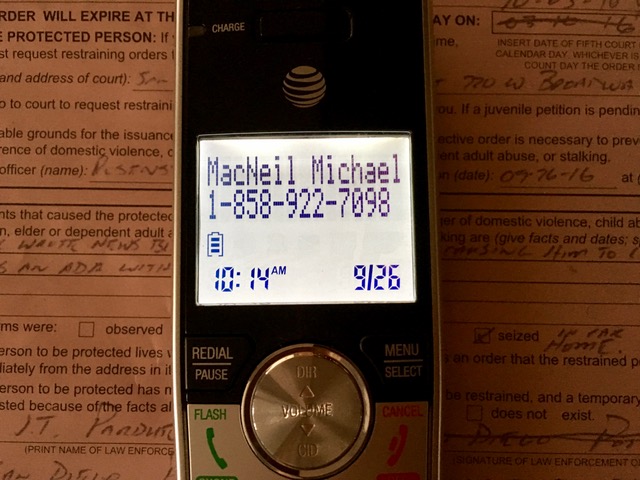 Having seen some of MacNeil’s text messages, I declined to return his calls.

Then MacNeil showed up at my place and wouldn’t go away.  He returned three times, (and lied about it, later.)

He also knocked incessantly on my door each time he returned.

But San Diego Police were on the job. When I dialed 9-1-1, I told the operator I’d suspected MacNeil brought a gun with him.  When officers rolled up, MacNeil hopped out of his car, and they immediately confiscated MacNeil’s fully loaded Glock as well as his Concealed Carry Permit. 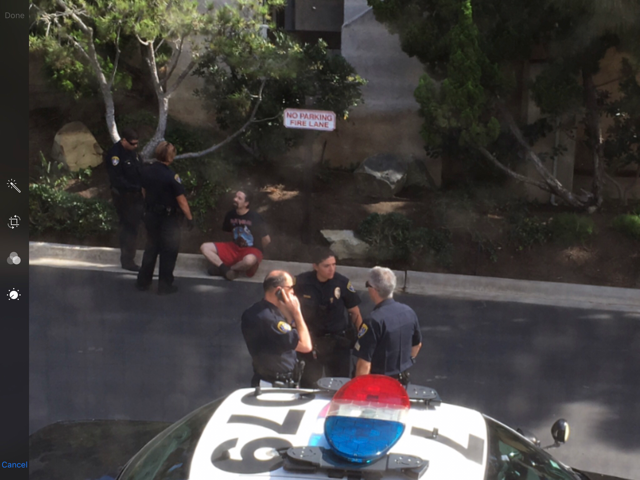 San Diego Police deemed MacNeil a “credible threat” to me and requested an Emergency Protective Order.  It was granted and they served him on the spot.  Then they accompanied MacNeil to his parents home in Rancho Santa Fe, and took seven more weapons, including two, long guns.

Officers told me to get a real restraining order as the Emergency Protective Order was only good for a week.  I applied for one, and had a little trouble getting MacNeil served.  As one Deputy said with a bit of humor,

“I drove up and MacNeil jumped in his car and drove right past my black and white.”

But officers were pretty surprised when a week later, I told them Judge John Meyer denied my request.  And this was after learning MacNeil was on three different mood stabilizers.

I will never forget Judge Meyer’s take.  He said,

“Oh no.  An attorney with a restraining order is a career killer.”

This was quickly followed by “He has a right to bring a gun to a conversation.”  Apparently this beats my Constitutional right to live in safety, without fear.

So I sued MacNeil for simple harassment.  Surprise.  He ducked service again.  Well, actually that part wasn’t surprising.  I expect to lose, but not because it’s San Diego and that would be normal.

I expect to lose for another reason.  Stay tuned for my next post.