Also, the Reading of the Verdict.  (Personally, I think the jury was disgusted Brandon painted himself as a victim.)

The Victim testifies.  The Victim soon learns her protector – is post-crime, conducting himself as a victim.  The Victim is confused.  This follows: 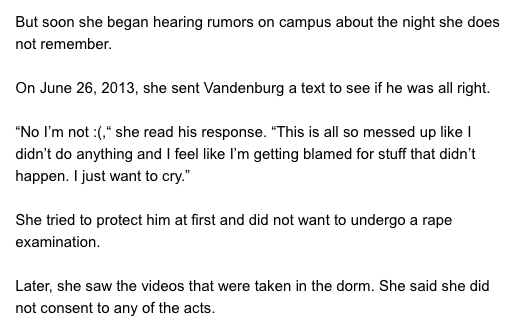 A little background on the Vanderbilt’s football players gang-rape, retrial.  As near as anyone can tell, Brandon Vandenburg, three weeks into pursuing his dream career in the NFL via Vanderbilt University, decided to look for a bonding moment with his teammates.

Vandenburg decided a “sports-bro” gang-rape was just the Ticket!

How could Brandon decide such a thing?

A little Vandenburg background may explain Brandon Vandenburg’s flat-affect in court.  I was recently contacted by a long-time friend of the family.

Will dig further but so am been told:  No One likes the father, Rod. No one. 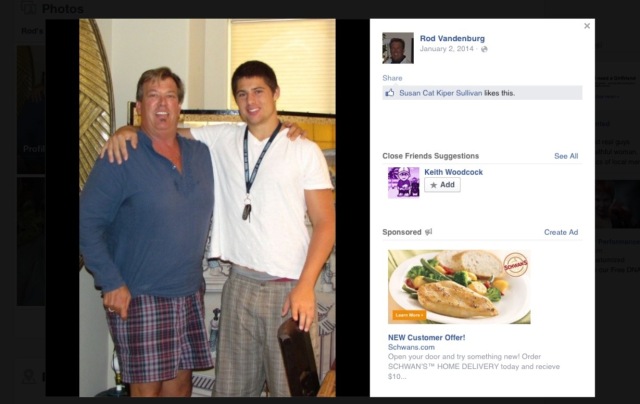 Was told Rod’s former male friends were uncomfortable over how routinely Rod treats women poorly.  That Rod has in his past, an assault charge involving his ex-wife.

Was also informed the Vandenburg’s daughter has specific medical issues, and Rod demeans her for them.  As for the the twins, who by all accounts, are nice, except that they adore their older brother; have eyesight issues.  (No pun.)  But they have never seen their brother, clearly.  Was informed they have more than an inkling about their father.

A quote from Rod:  “That’s right, his Daddy…taught him some good old fashion “Sourthern Charm” works every time.” 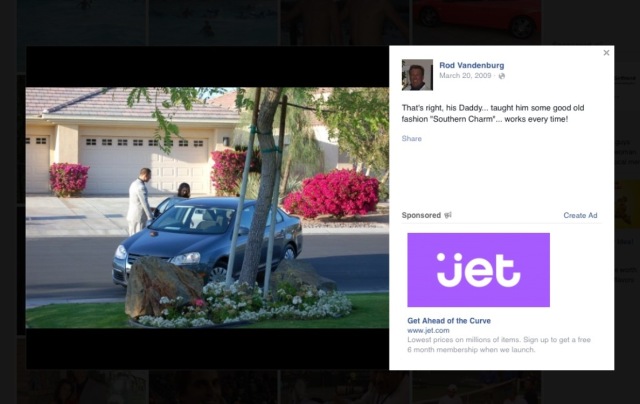 Rod, according to a family friend, was banking on Brandon going to the NFL in part because Brandon’s success would be Rod’s money ticket, as well as an invitation to further abuse women who like football players.  Will flush out more specifics and details should others cooperate.

So the family background explains Brandon’s flat-affect in court.  The Victim is not human to him.

I admit to being puzzled when listening to call-in shows with both anchors and the public saying, “The Victim was treated like garbage.”  I know how I treat garbage; and it’s at arm’s length.  I barely touch garbage.

However, the Victim was not treated like garbage.  She treated as a sex toy.  An unconscious, uncommunicative, real-life, but knocked out, sex toy.  She was treated as non-human with a pulse.  Her bruises demonstrated that.  The testimony revealed Brandon assured everyone she would not wake up, so it was okay to slap her and insert objects in her body, sit naked on her face, and other things.

We learned from the Victim that Brandon offered himself up as the white knight who cleaned her up afterward…and took care of her.  We also learned the reality was Vandenburg was taking videos of the Victim and forwarding them to his friends in California from the get.  As in before-during-and, afterward.

And we already knew that

<— Miles Finley, one of the people on the receiving end of Brandon’s texts, urged more crimes be committed upon the unconscious body of the Victim, in a very crude way.

Such is Brandon’s family background.

I won’t get into how Brandon’s father treats his sister.

However when the police first told the Victim she was raped, the Victim had trouble believing the police.  We didn’t learn why until later.

We learned soon afterward Brandon began complaining to the Victim it was all her fault.

We learned Brandon Vandenburg complained to the Victim he was Never going to help anyone ever again…and then he spontaneously had sex with her — knowing she hadn’t been to the police yet…and consensual sex would make a rape kit – moot. 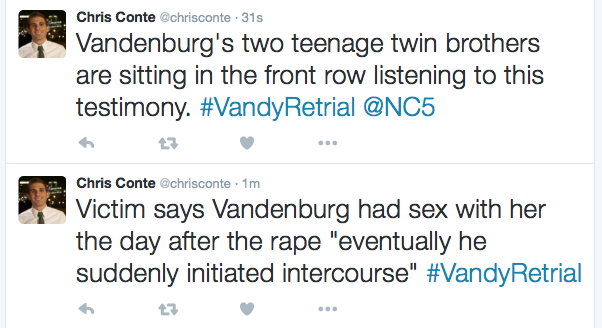 Keep in mind, this is the third time the Victim has returned to testify.

We also learned Vandenburg assured his teammates that they could slap the Victim because she wouldn’t wake up.  This speaks to a date rape drug but unlike the first trial, this time the Judge won’t allow the phrase “Date rape drug” in court.

But the thought hangs right there in the open.

So there is much testimony surrounding, a blackout drinker from alcohol, the Victim’s complete lack of memory.   As routinely happens after ingesting a date-rape drug.

So, there is much ado about a blue drink – did it come from Angie, the older woman booster of Vanderbilt football team, (who in call-in shows claims it did not) or; if it came from Brandon.

Again.  Horrible for Brandon.  The Victim is and remains, not human. 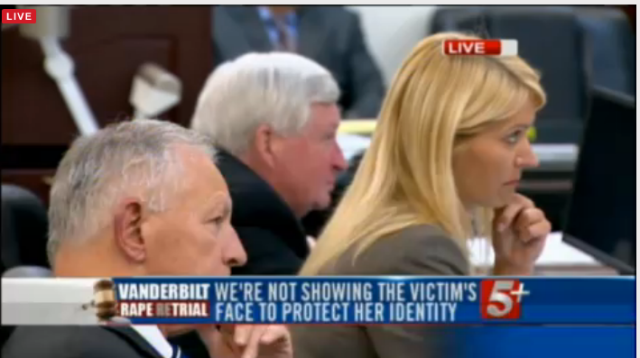 Now – a word about the one guy – the only sober guy there from the get-go, Mack Prioleau

Mack Prioleau stayed in the room during the Entire 30 minute attack, and other than turning his back on the Victim, and did nothing to stop it.

Mack Prioleau comes from a rich family.  Some in Texas, some in technology in Silicon Valley.

How could this happen?   Easy.

As a reminder:  At the first trial, 18 months later, Mack Prioleau who literally rolled over and turned his back to the Victim, then testified didn’t know if he would do anything differently.  Seriously.

Mack Prioleau transferred to a university in South Africa.  It’s claimed Prrioleau now does charity work.  By all means, lets have a look at some of the Prioleau’s friends and family adventures via the presentations he films.

No matter the verdict the take-away here is:  Women are disposable.  The question is not how they got this way, but why it’s difficult for women to be treated equally.

Good news – that answer is easy.

The Prioleau family are big-time Texas members of the party that routinely demonstrates their loathing of women.

So I researched and this is what legally was going on in government in the year of the sports-bro gang rape of  2013.  And found this. 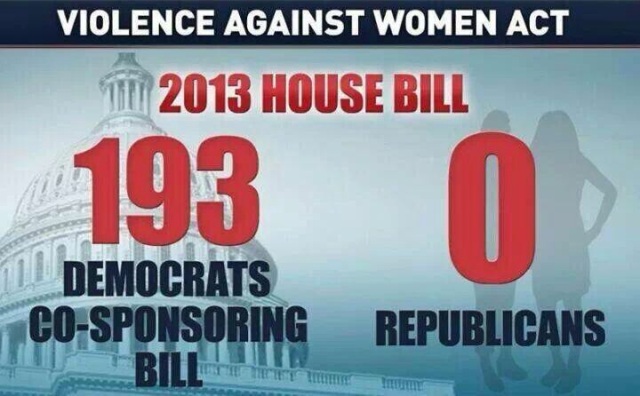 Mack Prioleaus has been very a very busy world traveler, since.

According to his blog,  Mack was in Japan, last month.

Why are the Vandenburg teen-age boys there?

My thought is Mom is (finally) no longer in denial.  So those boys are there to learn who their brother really is…and what happens when you treat women poorly – so those boys will be virgins until they marry.