Poor Joe Scarborough. After months of kissing the pudgy back-side of Donald Trump, reality finally smacked the former Republican Congressman from Florida right in the face.

With sidekick Mika, (who has perfected the art of eternally looking as if she’s about to speak) Joe blew up. Joe finally unleashed on Trump – below.

“I have taken the gun away from my head I am putting it on the table and now. It is in your hands on whether you are going to prove to the Republican party and me personally that you’re not a bigot,” he said.

The reality? Hillary Clinton totally called it when she said, “Trump is Dangerously Incoherent.” If Trump acts in such a way in his “real” life, and by this I mean the number of lawsuits against Trump to date, featured here, imagine how fast the blustery hot-head would send Americans off to war, over one of his business deals.

What happens when Candidates aren’t vetted

But what about the campaign?

GOP’s main problem is they can’t unring the bell — and in case anyone still hasn’t noticed….Trump is not equipped psychologically, to apologize. An inability to apologize isn’t  Trump’s biggest Achilles Heel — That would be his abject narcissism…but it’s a close second.

I’d say Trump’s inability to apologize is what has led to the thousands of lawsuits and ultimately, a blue print from Trump U – and how Trump will, eventually hit the gas  Thelma and Louise style – careen the Republican Party off a cliff.

When GOP finally wrestled Trump to a leash, aka: a script:   The effect was Donald Trump appearing to be on sedatives. He’s boring.

Worse, when Donald Trump is uses a teleprompter, for one of his impromptu press conferences, (that reporters are often prohibited) he dies in real time!

So the Republican Party insisting on bringing Trump to heel, is chaining a mean-tempered dog to a post, and not giving him water.  The idea was good, considering Trump doesn’t merely go off-script, but off-the-rails.  Still, getting Trump to conform isn’t going to work.

Not that Trump won’t attract racists. Sadly, America still has plenty. But it’s over and GOP knows it.

Cheer up.  It’s not just the Party Trump is killing.  But his own brand. 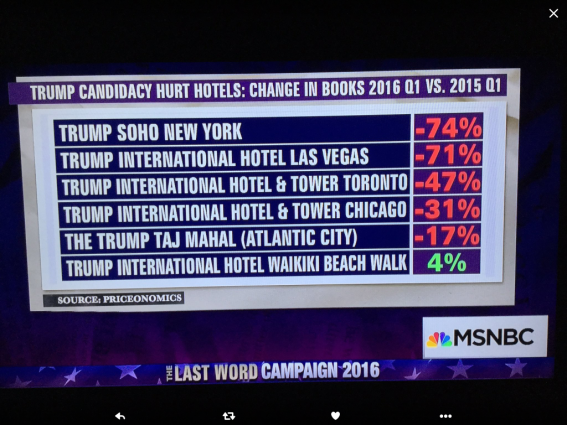 Back in time – it was the Democrats who prevented women from testifying in support of Anita Hill; which lead to Clarence Thomas on the Supreme Court.

No one who cares about civil rights, wants to see that repeated.  Hillary is smart, and plays the long game.  She knows it’s not just about an eights years being President.  It’s also about staffing the U.S. Supreme Court.