When Universities have a rape problem is a “Stop Hillary Clinton Super PAC” a surprise?

America’s largest problem is two kinds of misogyny.  Everyday misogyny – such as Rust College’s Professor Sylvester Oliver receiving no prison time for rapes; and casual misogyny.  Both casual, and “in your face” misogyny manifests in all three branches of government. Good news – we can fix it!

But first, watch Baylor’s Ken Starr tell the truth, and then his PR person guide him to a lie on, and off-camera.  It’s priceless!

Casual misogyny being worse than highly visible misogyny – such as when attorney Richard Emery, head of a Police Civilian Complaint Review Board was forced to resign after his very public, misogynist statements; or when a woman looking for a receptionist job at a law firm, was feeling threatened enough by a attorney Sunny Barkats, to strip and have sex during a job interview.  (She lasted one day.  When she didn’t return, Barkats texted threats accompanied by pictures of knives to her.)

Ah – law firms.  So what did Phillips Exeter Academy do when they faced their latest sex scandal.  They hired Holland and Knight – a firm that knows all too well about in-house sex scandals at the top.

Casual Misogyny:  Of the 1,000 police officers dismissed for “sexual misconduct” how many does the average reader know about?

The Backdrop – Educated to practice misogyny.

“In-your-face misogyny” embedded in America’s DNA from sea-to-shining-sea, because it is taught and practiced in schools across America.  Embedded, so both sexes are programmed, early on.  A couple of examples  – both just two days ago.

Teachers grooming students with full knowledge of school administrators and, in this case, the Governor’s husband.

and on the West Coast…from the top. 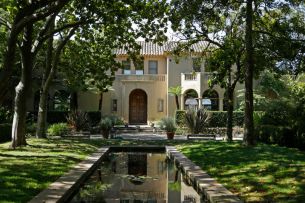 Oh Berkeley, you disappoint us so.

Faculty is furious as Berkeley’s track record for sexual harassment is, not great.

The grooming of girls for rape begins in middle school.  A variety of prior cases throughout the U.S. can be found here.

How we got this way!

Religion.  All religions.  From Muslims and Orthodox Jews, to Baptists – Protestants – Catholics or Evangelicals although there’s a pretty easy case to make for any evangelical.  Especially in the “No Dancing” sects. 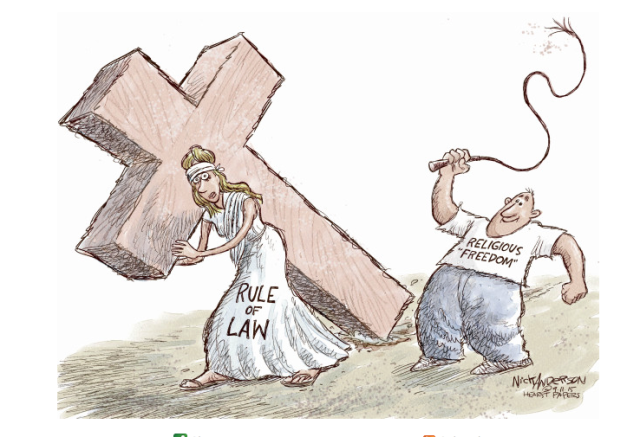 As Joan Rivers would say, “Can we talk?”  Since America is largely, Bible-prone – surely I am not the first person to notice there is,

“not a Single chapter in the Bible written by a woman.”

If a loving God created us all, equally….what kind of a lame God would create all this – and then preside over the making of any Bible that was without a Point of View of half the population?

Put another way, sometimes the biggest clue lies in what isn’t seen.

But it also makes sense that the re-telling of the story of how God wants us to live came to be brimming with men who had already begun to fantasize a goodie list regarding controlling women; largely because only men were taught to read and write.

So with that important fix being in from the get; how could male bias not weave their way into the script?

Also, seeing as no one was scribbling notes at the time; the Bible, the Koran – and the Torah were all written long after the events transpired – affording men the ability to replace any faulty memories with a wish list and no one able to edit.  (Add men who provided bi-lingual translation services – and Boom!  Opportunities to downgrade women in their native language, grew mightily.)

But and thus, biblically speaking:  All instruction for and about women – came from men!

How crazy is that!? 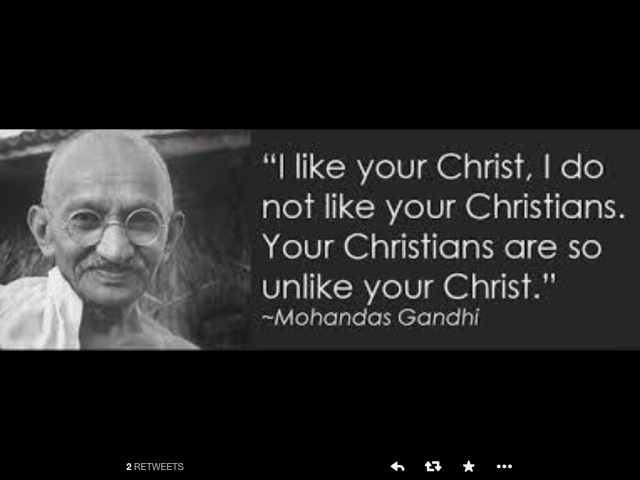 America was supposed to be about equal rights AND a separation from church and state for this very reason.  Otherwise, we’re no better than any other religion-governed nation. 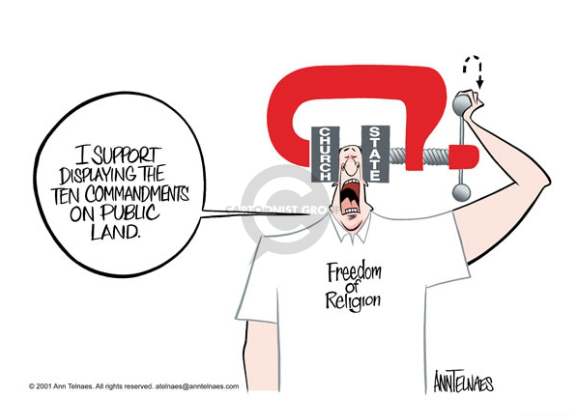 Sadly, as too many so-called “Christians” in office, embedded misogyny remains something no one is rushing from churches throughout the land to address.  Or acknowledge.

Ergo women are treated to scenes in real life like the guy below  –  who, understandably, might have trouble getting dates. 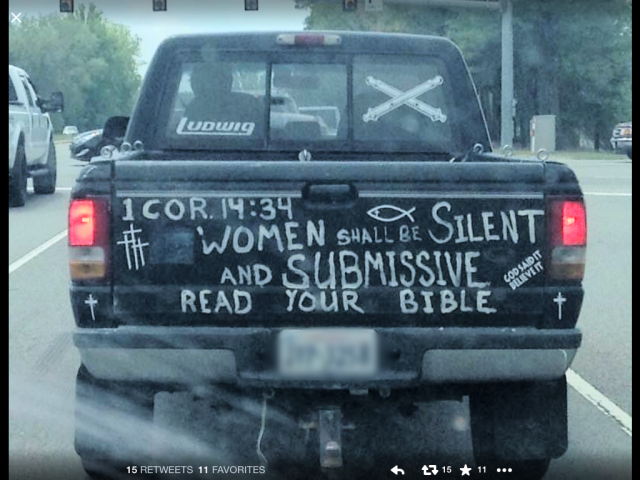 Houston – we have a problem

What happened when women began to wise up to this?

The first thing that happened was women spoke up.

The second thing that happened, was a number of men freaked themselves right out.

Yet for some super freaked out men, this is not enough Control.

These loons plan to scare women into submission. 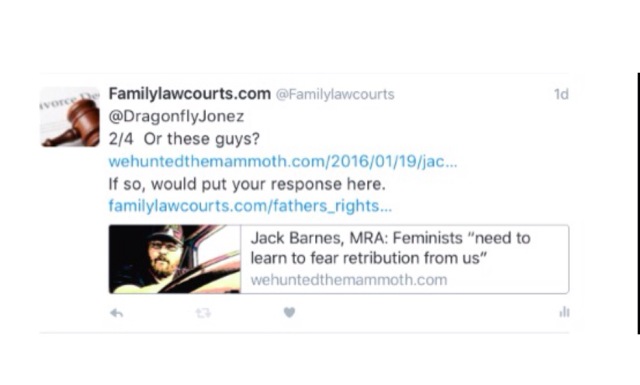 Feminists need to learn to Fear – according to some very scared puppies.

The MRA dweebs threw down a gauntlet.

They made websites.  They shook fists. “Feminists need to learn to fear retribution from us.” These fools have sooooo many “issues.”  I know this as

San Diego is home to some of the flakiest MRA’s around….and in 31 states, rapists have custody rights.  (And if you didn’t know that – kindly begin paying attention.)

Now for examples of causal, every day misogyny – the kind that happens so often we often ignore.

And lets stop that.

Senator McCaskill tweets and gets the below in response.

Mean tweet of the Day to Sen. Claire McCaskill

See below – left, for the kind of guy who feels perfectly comfortable casually tweeting pure hatred.  That’s right casual misogyny.  Oh, and this particular misogynist also freely admits to being a bigot.  Hey, a twofer! One:  Judge Pete Knight – “Step outside and button up!” 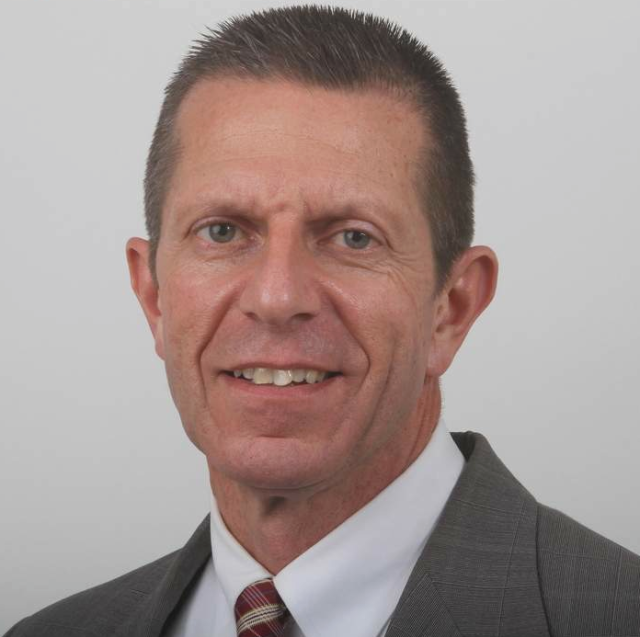 The State of North Carolina legally recognizes a Mother’s legal right to practice mothering in public.  This includes when Mothers need to use their breasts for their primary function.

Except for Judge Pete Knight!

You wouldn’t think Judge Knight would be stupid enough to threaten a breastfeeding mother with contempt of court for practicing mothering during  court.  But, you’d be wrong!

That’s exactly how casual misogyny works. Judge Knight did exactly that!  In listening to the audio of the Court appearance, people instantly recognized Judge Knight only views breasts as something to entice men.  The breast feeding baby didn’t enter the picture at all.

Not only that:  Judge Pete Knight also threatened the mom, with a Criminal Contempt Charge if she didn’t get out of his, (not the people’s court) immediately. How sick is this man? 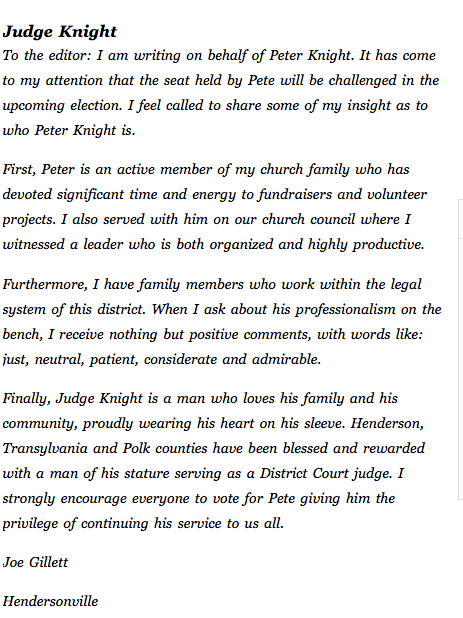 Religion and government Do Not Mix. God is not in our Constitution

Maybe not Joe.  Although you probably meant well, you also knew nothing, apparently, how Judge Pete Knight feels about the law and women when he filed for office. So, please.  Stay out of politics, rather than infect the office with some of that misogynistic, old time religion.  Thanks Joe. 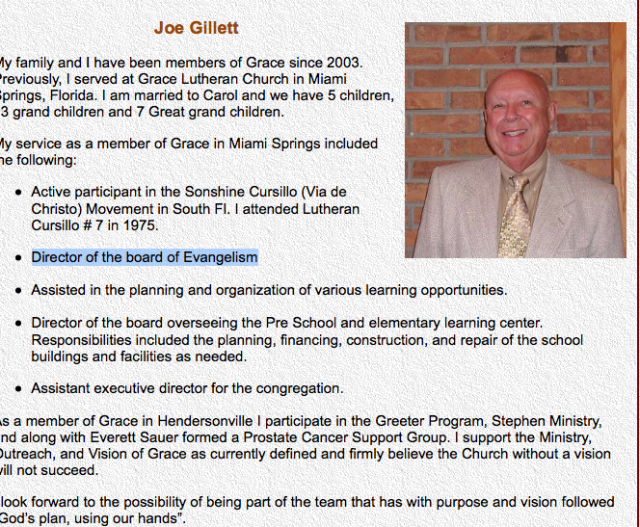 Please swear off recommending Pete Knight, and his Anti-American, tyranny of religion, for judge.

Gibbs casual misogyny may be the most dangerous.

Gibbs is the best example of the worst case example of casual misogyny.  Gibbs casual misogynistic stylings are draped in apathy and indifference.  No one calls men on their apathy.  How about lets change that dynamic.

Chuck Todd sends out a tease about rescuing women and children from sex and slave trafficking,

and Gibbs answering tweet, “I don’t want to know” reveals all as to the kind of “Christian” Gibbs is.

The solution is immediately addressing the kind of casual misogyny evidenced by Sam Gibbs, whenever and wherever it manifests.

That includes media.  Remember media being all over the Shehada Issa story?  (Father kills wife and son because he was gay.)  Immediate gay outrage!  Four days passed with the initial victim, Rabbihah, being identified by media according to her relationship “wife” or “mother” to the men.  Or, put another way, Ew.

Then, oops.  Turns out Shedada killed his son as a cover story for killing Rabihah.

Gay outrage and the story disappears in a twinkling! Anyone hear media addressing this?

Solution:  Lets do Sanity.  Equal rights for half the population. 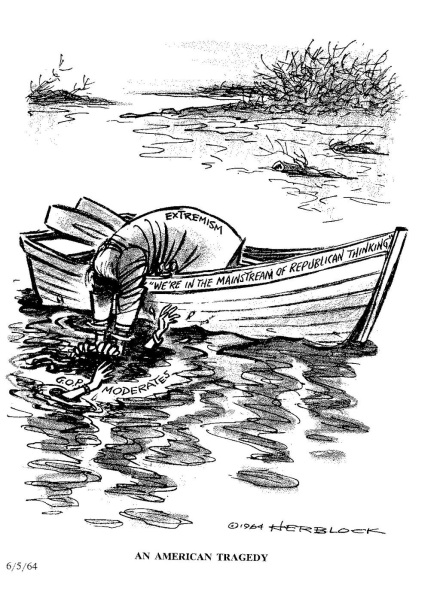 Sanity or elected Religious tyranny by fanatics in government bent on turning America into a Third-World mindset.  Also the reverse of the plan for America as outlined in our Constitution.

Anyone objecting –  please show me where GOD is in our Constitution.  Not individual “beliefs” the guys who wrote it – in the document, itself.

“Although the majority of our regular opinion writers are white men, we found that those who experienced the highest levels of abuse and dismissive trolling were not. The 10 regular writers who got the most abuse were eight women (four white and four non-white) and two black men. Two of the women and one of the men were gay. And of the eight women in the “top 10”, one was Muslim and one Jewish.”

And the 10 regular writers who got the least abuse?

Both sexes are responsible. When both sides don’t address casual misogyny, it continues.

Vote American values.  Not lame religious ones that attempt to devalue or demean women 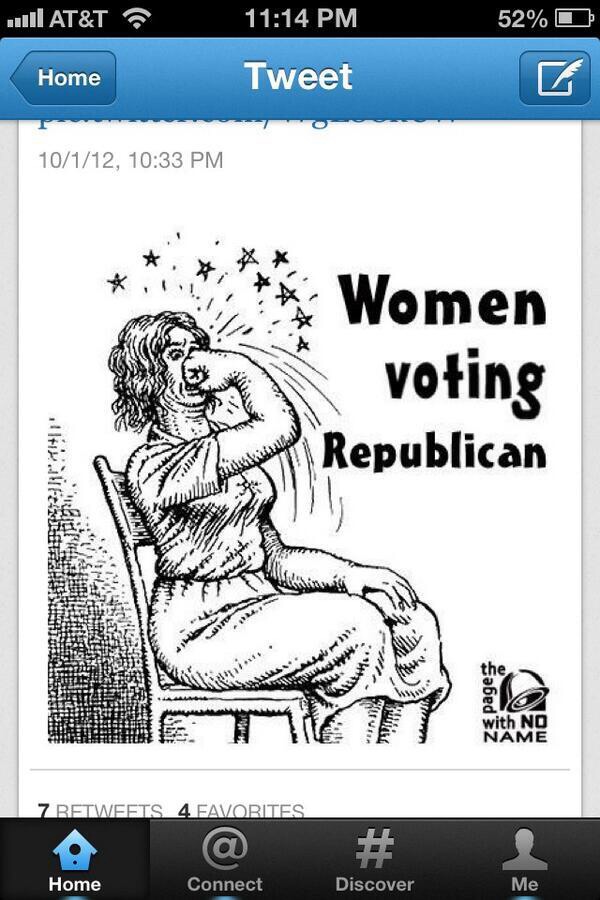 Vote for someone who understands what Christianity is really about. 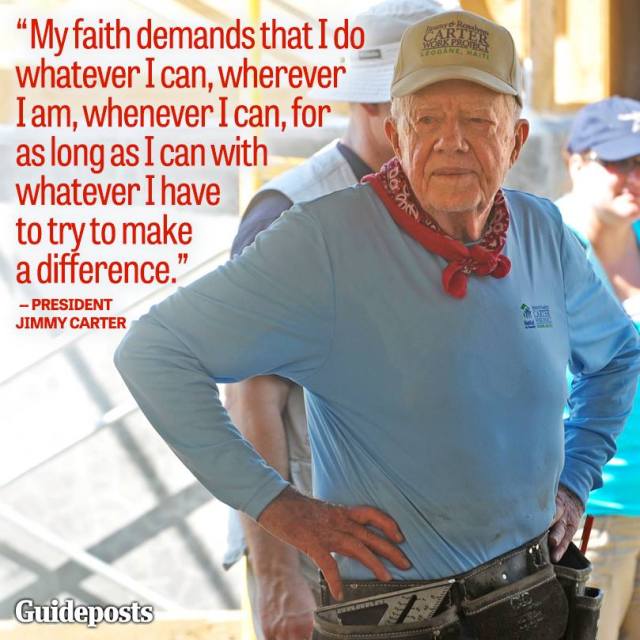 But if you can’t vote Democrat, find some, safe, sane Republicans – the ones who know American values means separating their church from their government is a core principle of our government.

Help our Founders make sure our Constitution that was constructed in such a way to protect America from the tyranny of religion, remains so.

I’m almost sure there are some sane Republicans who understand this.  Well, not really, but I like to be optimistic.

But either way…vote for the candidate that no longer will practice religion in office.  If none exist, stay home.  But whatever you do, Don’t vote to undermine America.

Hey, sometimes it is just that simple!  🙂

3 Responses to When Universities have a rape problem is a “Stop Hillary Clinton Super PAC” a surprise?