Just a Quick note to Joseph Taylor, Managing Executive Officer
Regional Head for North America Chairman & CEO, Panasonic Corporation of North America, (who lectures business students) regarding what seems like Panasonic’s, rebate shell game, at completion of one year of not paying rebates.

After posting my column yesterday, titled:  “To: Kazuhiro Tsuga, President of Panasonic: Why does Panasonic cheat customers?”

I heard from Panasonic’s head of National Sales, Steve Milley.  Finally.  The week prior Milley did not respond neither to calls or emails.

But on Monday, December 16, 2015, Milley roused himself to respond, albeit disingenuously; with the below. 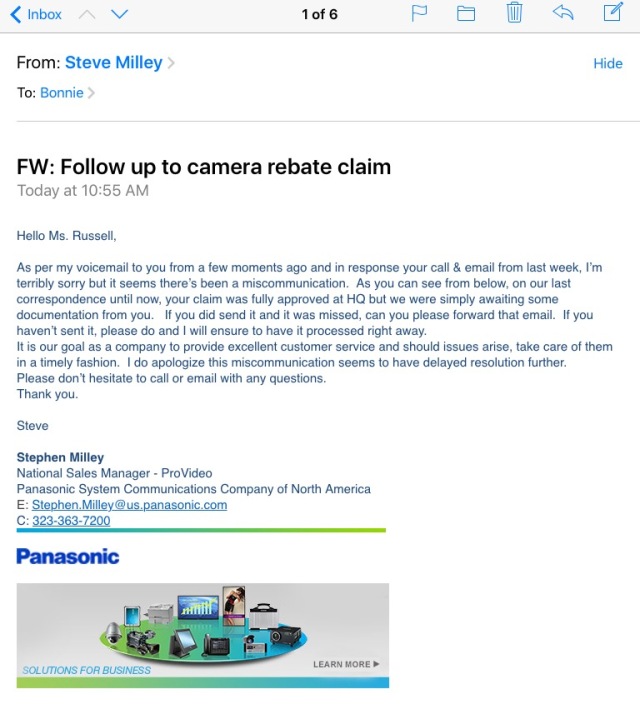 I replied, with the below, which was also, previously supplied. 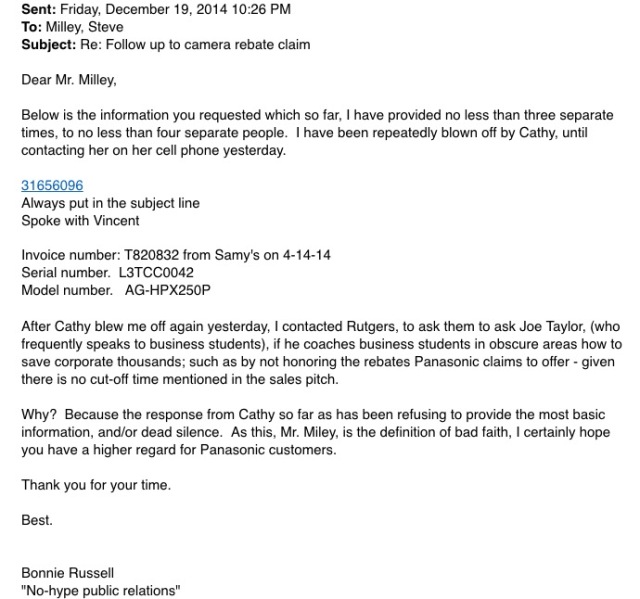 On Tuesday, December 17, 2015,  I received another email from Milley, this time stating he needed my company name and address.

The above email was the secondary email.  The name of my company and address were previously and long ago supplied.  Bonus points:  I also included a screen shot of the Fed-Ex delivery.

A delivery that naturally, included the company name and address.

This begs the question:

Personally, I think Panasonic should triple my rebate, and throw in a F-Series P2 card, given the amount of time wasted trying to secure it.  While such a move would be classy, does anyone see that happening?

On December 17, 2015, I received a call from Warren Martin, from the “Consumers Affairs” office, in Virginia.   Martin indicated all information was received and I should receive my rebate (from a third party company) in “four weeks.”

Not kidding!  He really said that!  And…with a straight face!  🙂

Martin pleasantly detailed (for Corporate’s sake, not the sake of any consumer) a long and corporate explanation of politely describing Panasonic’s rules and procedures for delay.

None of them were consumer friendly.

Which begs the question, “Why is Panasonic’s Office of Substantial Delay, identified as “Consumer Affairs?”

Particularly, when Panasonic customers after one year, continue to be stalled.  By Panasonic.

Doesn’t get more “Bad Faith” than that.

Because the issue of the rebate was year past due, yett remotely addressed by the Consumer Delay Department?  This prompted a GlassDoor check of from the area where some of Panasonic’s “Consumer Affairs” is located, and some unhappy campers.)

Naturally, I had another suggestion.  Mine involved a direct payment within 24 hours.

Will let you know how it turns out.

It's not about me....it’s always about people.
View all posts by bonnie russell →
This entry was posted in Business, Panasonic and tagged Joe Taylor, Panasonic, Panasonic Corporation of North America, Rebate offers - scam or not, Regional Head for North America Chairman & CEO. Bookmark the permalink.