Breaking:  The facade and fallacy of Fox News might finally explode.  A new lawsuit is poised to finally and fully expose the Saudi involvement in the attack of the World Trade Center. Details of the Saudi 9/11 connection in the New York Post.

Americans might remember how fast President Bush allowed certain billionaire Saudi’s to jet out of New York after September 12, 2001.  Years later in 2012, UK papers asked why Saudi Royal family was not questioned.

“Startling new information shows the FBI never questioned members of the Saudi Royal Family before allowing them to flee the United States in the days immediately following the September 11, 2001, terrorist attacks.

Aboard the plane were two princes — one of whom allegedly had been in contact with al-Qaeda before the the attacks and another whose father’s longtime adviser owned a house in Florida that was allegedly visited several times by some of the hijackers.

What’s more, the FBI’s detailed report to Congress and President George W. Bush on the Saudi exodus was so flawed, it didn’t even correctly identify one of the princes.”

Most of America, became 9/11 weary.  Others reluctantly moved on.  However, some stayed the course, including the late, Chalmers Johnson.  (Readers unaware of Chalmers Johnson, can choose to educate themselves with any of these articles.  Related:  Chalmers books are so meticulous well-researched, Mrs. Johnson told him to quit writing.  “You’re scaring people” she said.)

But now comes perhaps the biggest news of all.

Those who believe the message from the Australian Born, Rupert Murdoch owner of NewsCorp (FOX) represent American values, are guilty of not paying attention.

Perhaps, willingly so.  So the question is why would anyone believe the foreign-born Murdoch, whose second largest stockholder is Saudi Prince Alwaleed bin Talal, is pro-American? 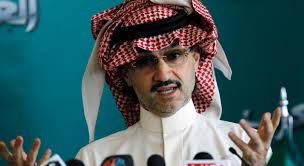 People who watch the anti-American FOX have no idea FOX is America’s 24 hours a day, anti-American, Trojan Horse.

After all, it was Murdoch’s News Corporation that created FOX NEWS and the anti-American Tea Party.  A Tea Party that frequently demands a religious nation, the Exact Opposite of the expressed mandate from our founding Fathers.  (Something Tea Party people never address.)

The lawsuit might expose just how protected certain people have remained, while FOX News goes about their anti-American, Bible toting, media rants.