Murder, Media, and stock values, on the killing of Alison Parker, Adam Ward

When media, murder, and publicly held companies converge for good.  Or not.  A story in four parts. 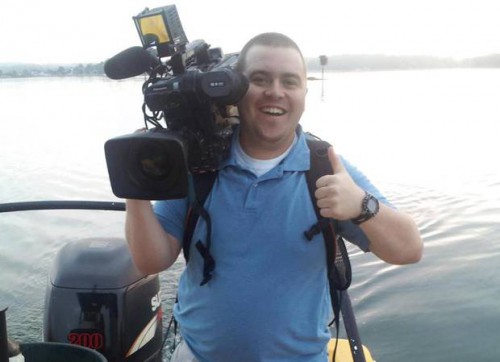 First:  There haven’t been enough accolades for Adam Ward.  Adam’s camera expertise and more so, his profound passion for life allowed him to tip the police to his and Alison Parker’s killer; Vester Flanagan, aka:  Bryce Williams.  Flanagan was in his second year of being a former co-worker – and he nursed long-documented, anger issues.

Second:  Vester Flanagan was both a very troubled man; and really bad shot.  Alison, while wearing a brace, just booked it after Flanagan’s first, point-blank shot missed her.

Alison covered a lot of ground before Flanagan, hunted her down.

Third:  Media is working over-time on this, albeit not exactly with police help.  More on that later.  But for now, journalism hasn’t been working over-time.  One of the big unanswered questions is:

But in a story told in pictures, Twitter, Facebook, and Google, the public is keeping media – often confused with Journalism, honest.  Mostly.

However, as Twitter is a political force, Twitter folks began noticing yet another anchor – this time Matt Lauer, was the latest anchor to pander to Donald Trump.

The journalist Trump continues to describe as “screaming, ranting, and raving” was not. Why doesn’t media correct Trump?

But Trump fascination promptly ended with the terrible news out of Virginia of the double-murder of Alison Parker, Adam Ward, and the wounding of Vicki Gardner.

Adam Ward shot the killer with his camera.

Turned out, the wannabe television star anchor was also filming his murders.  Video revealed Flanagan had to chase down Alison, who, while wearing a brace, was making good time and distance away from Flanagan after he blew his initial, point-blank range shot.

Alison cringed at the first shot, which missed her.  Note Alison’s leg brace.

Then came the moment Alison recognized her killer.

Alison wasted no time.  She turned and ran.

Please note, Alison continued to run.  This is not a shot of Alison falling.  No, Alison was making good time.

See top of the shot.  That is Alison’s leg. She was gaining ground.

SECOND – Pivot to media.  Not journalism

Below was just one tweet was to Google, asking:

Franz Strasser complained that the police threatened to tow his car if he didn’t remove the pictures he snapped after the police arrived on-scene.  Flanagan had already shot himself.

Sadly,  Strasser morphed from journalist, to media type.  In a twinkling. 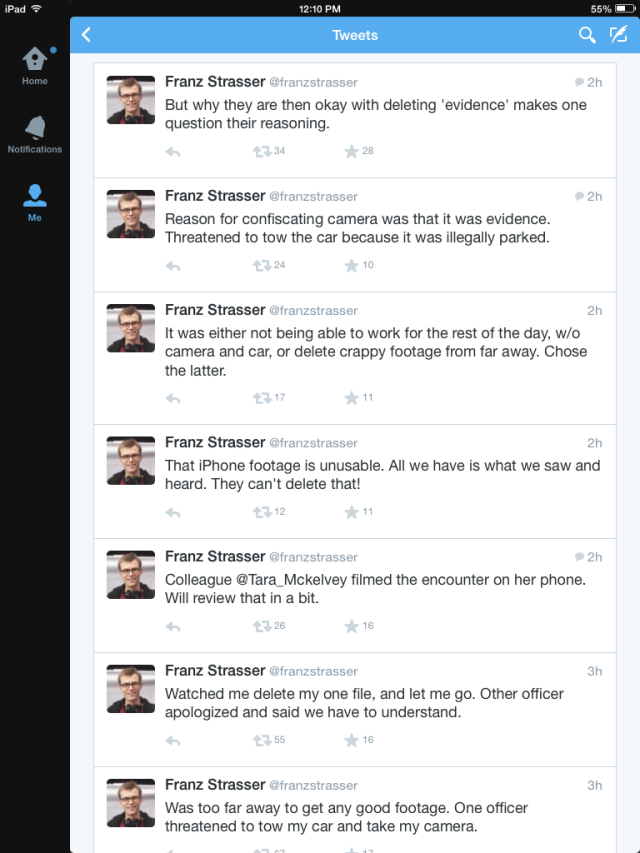 Yes, James Morgan made the reporter, the story, on Storify.

Why would Morgan do that?  Because <eye roll> Morgan’s the engagement editor and Social lead for @BBCNewsUS and @BBCPopUp. @BBCNewsMagazine writer.

Check the comments on Youtube.  276 people commented on Flanagan’s Youtube posting of the murders.  I pray for every comment there was a request to Google for its removal.

Noticed many people on Twitter demanding Flanagan’s account be removed.  Have no idea how many asked FB to do so.

But in that 1, 696 people witnessed the murder on Youtube  – and 256 people “rated” Flanagan’s murder.  All Media reported reported the video was quickly taken down after “moments” on line.

Which was so far from the truth…as to be contemptible.  In fact, the footage is still up.  Eight hours later.  Not saying where.

Most people are very comfortable with a Twitter force for the good and loathe the sick people who Tweet.  But either way, Twitter has all but replaced AP.

The good news is via Twitter, we witness in real time when reporters like the above, decide to take the easy way out when covering the story; while trying to help take bad stuff down. 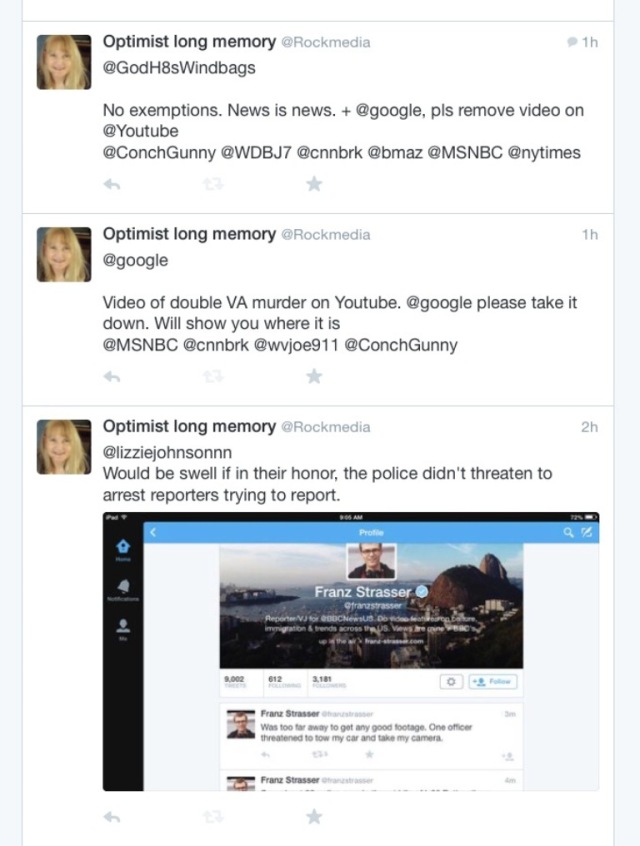 What this says about us.

That social media is used for social and criminal means.

But in journalism, Twitter can fact-check in how we digest media instead of facts.

FOURTH – The public can be more involved in ending Publicly traded companies who withhold facts from reporting.  The public can Demand a return of the Fairness Doctrine.

Media reports the murder footage is down, while stating it was only up “moments” is gross negligence, stupid, and, deliberate. The public can end this practice by demanding the FCC return the Fairness Doctrine.

Currently, would like to crown Twitter the king of all Media.  (Sorry Howard Stern)  But no can do because:  L

It’s one thing for media to not accurately report the facts, while shielding less than responsive high-tech, companies such as Facebook, Google and Twitter.  But when Twitter, a public company opted to delete politicians tweets?  That is so far over the line — the line can no longer be seen.

Google:   $628.62    Click here tomorrow to discover whether Google has gotten any better.

4 Responses to Murder, Media, and stock values, on the killing of Alison Parker, Adam Ward