Ducking an opportunity to educate, University of South Carolina President Harris Pastides, blew a “teachable moment” on Thursday, the day after nine people were murdered in cold blood in Charleston’s most prominent black church.  Although President Pastides could have opted for a true, teachable moment, instead he wimped out with a call to prayer on the University’s page book page…and; absolutely nothing else.

Mind you, Charleston’s black people are calling for change.  But Southern racists are  employing their standard, “we’re in mourning” racist sleight-of-hand.  The go-to refrain is

“Kinda of not the response needed.” 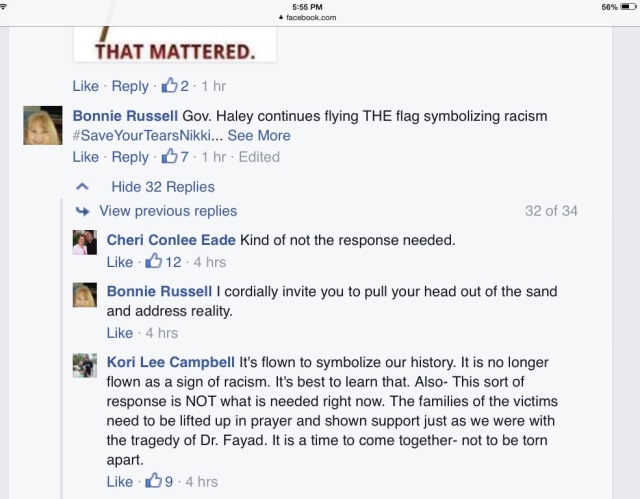 When I cordially invited Cheri Conlee Eade to pull her head out of the sand, Kori Lee Campbell chimed in with the standard,  racially motivated sleight-of-hand, pivot.

So in fairness to President Pastides, it’s not as if white, Charleston, South Carolina can ever be rightfully be accused of having a desire to leave the 19th century.

As such, President Pastides was definitely pandering to his racist base.  A base currently trilling for prayer and reflection, but won’t be calling for a date to act for the betterment of all.  So, no questions such as,

will ever be asked.

The legal definition of treason is:

1.  Dylann Roof owes an allegiance to the United States.  Check.

2.  Dylann Roof declared war on the United States by murdering in cold blood, nine innocent people attending a Bible Study.  Roof’s murderous actions were in adherence to the plans of our enemies who also want to kills us.  So, check.

3.  Dylann Roof’s cold-blooded actions also most certainly provided aid and comfort to our enemies within the United States.  Double Check.

Thus, while the definition of Treason (18 U.S. Code Section 2381)  seems to have been met, my thought which is open for discussion, includes changing the sentencing for treason to include, losing citizenship and being deported.  But only because I view the KKK and groups like them to be a cancer on the United States which has metastasized, and needs to be dealt with appropriately.  Prison, loss of citizenship, fines and deportation works for me. So…

It would be interesting if the University President talked about expanding the penalties for treason.

Who continues to lead a charmed life!

Oh, not charmed in a personal or professional sense.  He’s loud, broke, admittedly unhinged, and of course, carries a weapon. I just mean in case of Kincannon’s arrest, in Lexington County.  Todd Kincannon according to his wife and parents, is a gun waving, domestic terrorist.

Could be due to the fact the South Carolina Legislature functions in unison as a racist collective of the NRA.  And how lucky for Kincannon, in addition to getting himself arrested in Lexington County, that the South Carolina State Bar, decided to continue to not deal with their licensed, but mentally unhinged gun-toting brethren who threaten to kill their wives and parents?

Luckiest of all, was when Todd was finally, (belatedly) arrested for kidnapping his terrified wife, that he committed his crime in Dylann Roof’s stomping grounds:  Lexington County!

Although Todd has a history of threatening to kill his parents, his wife, and his own, chubby little self:  that’s no problem for Lexington County.  Like most places, Lexington County is pretty casual about family crimes.  They don’t mind.  In fact, South Carolina holds the nation’s murder rate for most husbands killing their wives.  (It used to be Alaska.)  Also, consider Lexington County’s, longest serving sheriff, James Metts.

Metts will be out of prison in a year and a day, and God bless his heart, he’s being really positive in the interim.

Maybe Metts’ll do an interview about crime, post release.  He gets to keep his pension – praise Jesus!  Hallelujah!

But 19 hate groups in South Carolina?  Something must change.

Returning to the audacity of no action from the University of South Carolina’s so-called institution of higher learning (my love for irony, endures) enters:  A breath of fresh air!

Former graduate Jack Montgomery checked in. After graduating from the University of South Carolina, Montgomery now sees the world regularly from far away places.  His Facebook pictures are breathtaking.

Also, checking in?  The Atlantic: comes the real historical slant to which South Carolina whites, cling to, while ignoring reality.

This moral truth—“that the negro is not equal to the white man”—is exactly what animated Dylann Roof. More than any individual actor, in recent history, Roof honored his flag in exactly the manner it always demanded—with human sacrifice.”

Still, President Pastides has the committed racist populace having his back.  So Pastides, continues offering nothing of substance to those who back a return to the norm.  The norm being Anti-American people able to walk in and killed nine innocent people attending a Bible study, saying he “had to” due to people just. being. Black. 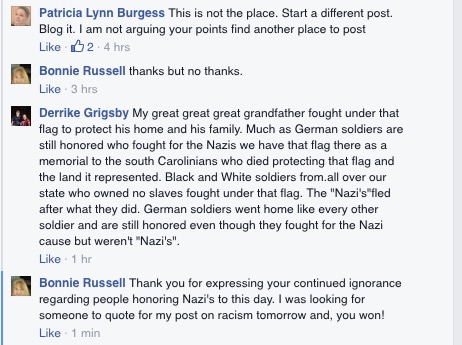 [SIDEBAR]  Had to laugh when Hampton Cooper twice said my Facebook profile was fake.  (Hampton’s entry got 5 likes, so you know it’s a brain trust.)  But seriously, how dumb can people be when people Facebook and blog under their own name for years?

Last, meanwhile, did ya’ll know the State of South Carolina in its collective, NRA paid wisdom, had been working to ease existing gun laws?  You know South Carolina won’t do anything, so it’s up to the federal government to deal with KKK types.

Most people who love American say if South Carolina were a fish, they would “Throw it back.”  I say, the land is okay, just expand the the sentencing for Treason to include deporting the Un-American racists plotting to aid our enemies by attacking black Americans.

Maybe Andy Cohen could jet down and put together a fun TV show featuring the thriving black tourism industry.  Speaking from my experience visiting St. Simon Island, Georgia; black history was far more interesting than anything else there, many times over.  I figure history wise, Georgia has nothing on Charleston.

So my next visit to the low country will begin with Black History, and African-American Heritage.  If it’s too humid, will hop this bus. When I get hungry….will start with Huger’s Fine (Soul) Food and take it from there.  You can too!

It’ll do as we collectively deal with this:

If anyone reading this is attending the University of South Carolina, sorry.  Consider asking your parents to transfer you to a school interested in promoting a real education in higher learning.