Talk about brave.  The victim in the Vanderbilt football-gang rape case came back to face her accusers.  Only Cory Batey, who had not known the victim before attacking her within two minutes of her unconscious body being dumped on the floor, faced her.  Cory apologized.  Then he cried.

Brandon Vandenburg, the victim’s former boyfriend and date for the evening, did not face the victim.  But then, Brandon also opted not to really face anything.  Brandon is relying on his defense attorneys to speak for him; and per Brandon’s right not to provide any testimony which might backfire and work to assist in getting himself convicted, Brandon used the Fifth Amendment, to not testify.

However, throughout the trial, the one question I wished DA Jan Norman had asked, was simple.

“Do you still drink?”

The answer would have revealed whether any of the ex Vanderbilt football players who  now answer as “Defendants” had learned anything.   Anything at all. But it wasn’t asked.

Brandon limited himself to stealing looks to his family during jury instructions. 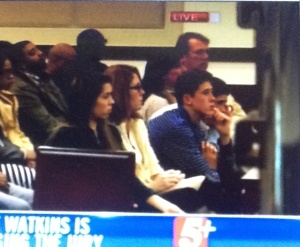 Clues to how Brandon arrived at his criminal sense of entitlement and complete degradation towards women might be found…on Facebook!  Consider a comment made by Terry,  a friend of Brandon’s Dad, Rod.  Rod wrote “Heard this oldie today…brought back a big smile…it’s one of my favorites!!!” in November of 2011.

“Hey Rod:  This song could be your National Athem (sic).”

Contrast that with Rod Vandenburg’s parental creed, which oddly enough, he also believes.

post-bail, in California. Both look happy and relaxed.  Perhaps they thought the attorneys all had it “handled.”

“Hmmm, can’t wait for tonight?” just before Brandon takes his high school girlfriend out for a big date.

and then from the window.  “That’s right, his Daddy…taught him some good old fashion “Southern Charm”….works every time!”

But it’s fair to say things were loose among the parents where alcohol was concerned.

Note the comment about Moms from one of Brandon’s high school buddies.

Also, consider texts from other Dad’s of friends.  They know what’s going on.  “Remove some of the bodies in the house is (sic) well”

Dads who provide no parental example beyond keeping the house clean.

No parental comment from Dad as to the “Hoes”  Zip.

Then consider Brandon’s mom, Shawna Vandenburg who states her worry about “ulterior motives, after she knows the lengths Brandon employed to hide evidence.

In full denial or pr mode; when Mom Shawna lists 10 reasons she loves her son Brandon  – his arrest and charge of assault, after he was bailed out, wasn’t on the list.  Nor was any prior mention of Brandon while in high school, being benched for most of a season for his “bad attitude.”

Now compare the hangover musings of Brandon’s crew in California, prior to Vanderbilt.

With a sleepover with Brandon’s younger, twin brothers below, in December 4, 2014 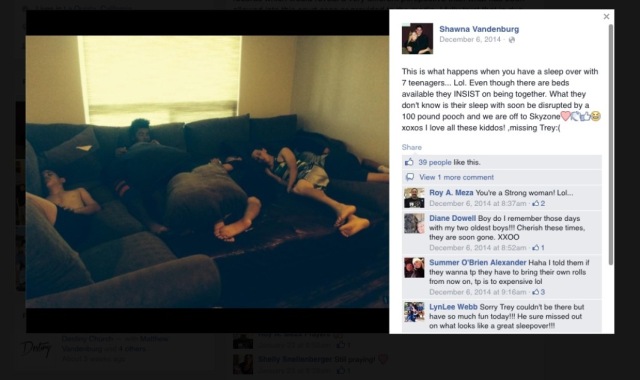 It's not about me....it’s always about people.
View all posts by bonnie russell →
This entry was posted in Rape and tagged Brandon Vandenburg, Brandon Vandenbury, football, law, Rape, Vanderbilt University. Bookmark the permalink.