Dinesh D’Souza files for divorce and is sued by business partner.

aren’t anticipating settlement of their lawsuit by 2016.  They filed suit in San Diego, claiming D’Souza tried to divert funds from his surprise hit, both to dupe his business partners and his wife.  All while hiding the fact he was sleeping with his on-again, off-again college student fiancée, Denise Joseph.

Once his affair became public, D’Souza, who grew up in a Catholic family, said he didn’t realize it wasn’t cricket to become engaged prior to divorce, and was working with his San Diego attorneys to divorce his wife, Dixie.  D’Souza then resigned from his post as president of The Kings College.  [UPDATE]  Mrs. D’Souza filed this Declaration. which highlighted, if not hiding financial assets, then moving them around.  Dixie D’Souza’s declaration also referenced physical violence.

Perhaps to engineer more profits for himself.

D’Souza is the plaintiff in his marital dissolution, but Defendant in a civil suit filed by his business partners, headed by Douglas Sain.  Sain claims after the box office success of 2016 D’Souza moved to acquire a bigger stake in payments.

The complaint states D’Souza sought unnecessary debt financing of $1 million, on top of the $2 million Obama’s America Foundation needed for expenses, so he could claim a $50,000 finders fee, and then blocked payment of $1.5 million in theatrical revenue to the production company, from the movie’s distributor Rocky Mountain Pictures, to trigger “the need to use $1 million of borrowed funds to pay vendors,” and earn D’Souza his fee, the complaint states.

It gets worse. The suit also claims D’Souza used a diversion tactic, channeling money to India to hide funds.  But that could have been a “Twofer” both against his business partners and wife.

The suit also states, “Through D’Souza’s bullying management style, including numerous threats to terminate his relationship with the picture which he conceived, D’Souza has already derived a disproportionate share of the film production budget for his own limited services: $827,500 of the $2.5 million budget (which excludes his future earnings under his services agreement and as an owner of OAF),” the complaint states. (Parentheses in complaint.)

Sain seeks declaratory judgment for their binding executive producers’ agreement is a binding agreement, and requests the judge enjoin D’Souza enjoined from taking any actions violating that agreement.

To date, only fiancée Denise Joseph seems to have benefited.

[UPDATE]  Well, we know that D’Souza dodged prison…and the arbitrator said Sain hadn’t made his case.   Neither Sain nor his attorney returned my calls (Day Two.) 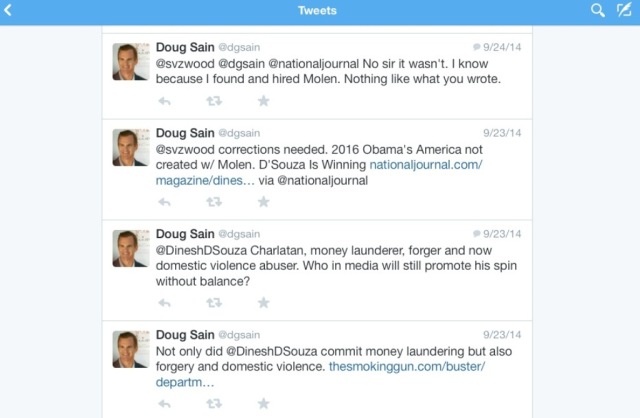 The good news:  The good news is those with common sense and intelligence do understand D’Souza’s a felon because he’s a clever enough con artist to appeal to racial hatred.  Yep.  Dinesh D’Souza, just like those before him, is getting rich thanks to racists.  (Racists who conveniently forget their American Christian “values’ when it race, darn near every time.)

The bad news:  As evidenced by Dinesh’s supporters, including “Hypocritical Hal” (Moroz) is this:  There’s a lot of dumb people in America.  My sources say Dinesh is a big hit with Glenn Beck crowd and that people actually listen intently, without laughing when either speaks.  Seriously.  These would be fans of FOX news who remain unaware the second largest shareholder in News Corporation is a Saudi prince.

It's not about me....it’s always about people.
View all posts by bonnie russell →
This entry was posted in Law, Politics and tagged Hal Moroz. Bookmark the permalink.

2 Responses to Dinesh D’Souza files for divorce and is sued by business partner.